Hiking Holland. Is it possible? We may not have mountains, but Holland is well known for its coast, which sure can be hiked.

[This blog is in English, so my international readers can keep reading below. For my Dutch readers, I also wrote a post about Holland’s Coast Path in Dutch. Klik hier voor Nederlands.]

Kingdom of the Netherlands

Confused? Yes, me too! So back to the Holland’s coast path, which covers Holland: the two provinces North Holland and South Holland (LAW 5.2). In about 13 days you can walk the 253 kilometres from Hoek van Holland to Den Oever.

By the way, LAW is the Dutch abbreviation for long distance trail: Lange-Afstand-Wandelpad.

My reasons for picking this long distance trail – it may surprise you, but there are actually 12 other Dutch long distance trails – is simple: I love the coast and it is nearby. For section hiking, this trail is perfect for me, as I live in South Holland. South Holland and North Holland are the most populated areas of the Netherlands, which comes with the advantage that travelling to the trailheads by public transport is easy.

What I like about this trail so far – having hiked 60km in three sections – is its diversity. Of course, this is relative; it remains a coastal path after all. However, on one day, you can walk on the beach, in the dunes, and through a forest. Often, the trail connects to a city or town, which gives the opportunity to visit famous beach towns as Katwijk and Noorwijk, and to explore the historic cities The Hague (Den Haag) and Haarlem on route.

Detailed descriptions of the sections (in Dutch), maps, and gps files can be found at the website of Wandelnet. Wanna know my experiences? Stay tuned, I’ll write about the first sections soon! 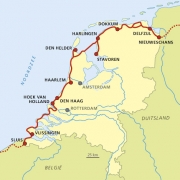 wish for even more coastal hiking, there is good news for you. Hoek van Holland connects to 210 kilometres of trail (LAW 5.1) along the coast of Zeeland, in the south of the country. From Den Helder, you can hike to the north coast in Friesland and Groningen (LAW 5.3). Together, these three trails (LAW 5.1, 5.2, 5.3) form “the Dutch Coast Path”, covering 725 kilometres.

Let me know: What are your experiences with hiking Holland so far?

5 thoughts on “Hiking Holland: what about Holland’s Coast Path?”