Hello there! I’m back! Back on the blog, back from a long adventure in New Zealand. During my travels overseas, I soon discovered that I’m not made for blogging while travelling. First of all, hiking – or tramping as the kiwis call it – is exhausting. On ‘zero days’ (hiking jargon for days of zero walked kilometres, but not to be confused with rests days) I was happy if I could get a little bit of rest, because usually zero days were filled with ‘camp chores’ such as resupplying food, and doing laundry. I also tried to keep up with my personal diary, and instead of blogging I tried to frequently post short updates on instragram. Even that was a challenge from time to time. Blogging is even more time-consuming and frankly, although I like writing very much, I like hiking and travelling even more. So I decided to fully live the hiking and travel life. But here I am, back in the Netherlands. One of my resolutions is to incorporate blogging in my normal life. Before I share my resolution and reflect on those of last year, it is time to look back at 2016 (even though we’re already entering spring…)

Dutch readers can now read my blog here (in het Nederlands). All others, stay tuned, and continue reading below!

Professionally, personally, and travelwise, 2016 was a beautiful year. Both at the start of the year, and at the end of the year, I was hiking. One of the best things in the world. Back in the time, however, I thought that hiking in the winter was something different. Cold, wet, not enjoyable for me. I was proven wrong when I joined a group of hikers and spend the weekend in the snow-white High Fens of Belgium. Watch it yourself and read the entire story about how I survived it here.

Can I go on an adventure in my home country?

Before I left t

he Netherlands for a big adventure, I had an office job and was struggling to combine it with hiking trips. Although I love the idea of a microadventure and certainly tried it, I was still struggling with the overnight aspect of it. [It’s currently defined as “an overnight adventure that is small and achievable, for normal people with real lives” by Wikipedia.] But I guess it’s not about definitions. As I understood it right, Alastair Humphreys introduced the concept of a microadventure to inspire normal people like you and me to go out in the woods while still having our office jobs. By loosening the definition and by being a bit creative, I came up with my own ideas for small-scale adventures that I could integrate in my normal life. I was intent on walking another section of Holland’s Coastal Path, so I took my crappy Dutch bike and started peddling to The Hague – hereby combining two small-scale adventure ideas with each other – from where I could easily connect to the walking trail.

From The Hague, I took a bus about 25 kilometres south and started the trail exactly where my friend and I left off . Back then, I took a photo of the bus stop where we stopped, which appeared to be very helpful to get back to the trail. The landscape was diverse, but frankly, the cultivated areas with lakes and houses didn’t do it for me. I was thrilled when I entered the dunes and walked to the beach. Even though the beaches near the Hague are busy, I was happy to take a short swim before continuing my walk to the city center of The Hague itself, which is absolutely stunning with its old buildings, particularly the house of parlement (apparently, the oldest building from ‘the binnenhof’ dates from before 1230).

An outdoor girl on city trip

I’m a 20-something in love with the outdoors. Doesn’t mean that I can’t appreciate city life. However, since I embrace a slow travelling style (which is well characterized by the amount of travelling by foot, the slowest form of travelling I can think of), I also like to take it slow on a city trip. I don’t like to hurry around a city from hotspot to hotspot. Instead of ticking the boxes of all the well-known places, I’d rather wander around the streets to get a feel for the city, visit a few places, and take the time for coffee, lunch, and dinner. Budapest was one of our last weekends together before I took off to New Zealand, so we definitely took it easy. We enjoyed Hungarian food, walked to the castle and along the Danube river, which divides Buda and Pest from each other. Budapest is also known as the ‘city of spas’ with its numerous thermal baths, served by the hot springs running underneath the city. We visited the Széchenyi thermal bath and were impressed by the architecture of one of the largest bathing complexes in Europe. 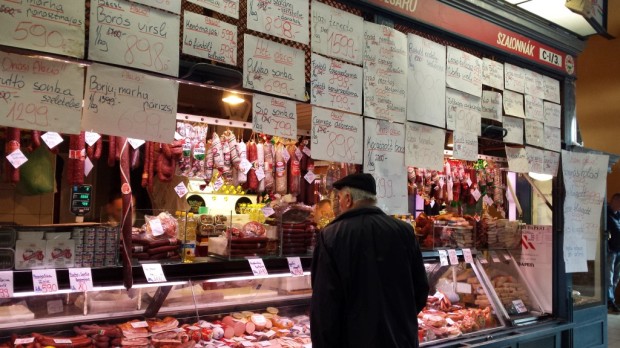 The Great Market Hall is definitely worth a visit

A weekend to Switzerland?

Yes, I wished. Not feasible for a weekend unfortunately. Luckily, though, a place called ‘small Switzerland’ triggered my attention. It is actually a nickname for Muellerthal, an area in Luxembourg, which was also within drivable distance from Rotterdam for a weekend. We hiked along the Muellerthal trail, following the 37-kilometres long route 2. The forest was beautiful, but nothing could compete the rock formations: phenomenal! I particularly liked the parts where we had to find our way “through” the rocks, which can’t be done without head torches; that’s how dark and narrow the path between the rocks is.

To the highest mountains of Northern Europe

If you haven’t noticed yet, let me tell you: I have a thing for the mountain areas from Northern Europe: Scotland, Iceland, Norway. This year, we decided to go back to Norway. Hopefully not for the last time, because there are so many more national parks to visit. Jotunheimen national park, which translates to ‘home of the giants’, was this year’s destination for our summer holiday hiking trip. We started at the Besseggen, which is a well known rigde looking out over alpine lakes. After the Besseggen, the crowds disappeared and we had the mountains to ourselves. We planned to walk the two highest mountains of Norway (and thereby also of Northern Europe) and it was the first time I climbed above 2000 metres (~6560 feet). I guess I have some writing to catch up to, cause I never wrote about this trip or our hike over the Hardangervidda, except from the walk to Trolltunga.

Going on a big adventure in New Zealand

Leaving home for months with the intention to hike the length of New Zealand along the Te Araroa trail, was absolutely the most daunting decision that I’ve ever taken. Changing my plans on the way may seem a natural thing when we think of travellers, but can be an emotional event as well. It still evokes strong emotions if I thing of it.

Since about a month I’m back home. In the beginning, I had to get used to  sitting behind a computer all day long again, which stands in strong contrast to my time in New Zealand. In a way, I felt more tired after a day in the office than after a long hike (and I can reassure you: the trails in New Zealand can be tough) and I didn’t have it in me to work on my blogs in the evenings, even though I would love to share the stories. I hope you’ll be patient, because one by one, they will appear on hikingwithliz. For now, you can read here why I decided to go on a thru-hike (or through-tramp as the kiwis would say) in New Zealand.