Winter turns me into a couch potato. You’ll find me on the sofa with lots of blankets, surrounded by candles and chocolates, watching Love Actually. Preferably together with my boyfriend Aaron, but unfortunately he can’t appreciate the predictability of those happy love stories as much as I do. So he suggested that we should hike instead. Yes, shocking, isn’t it? I almost choked in my chocolate when I heard it. Hiking when it’s cold. In the snow!!

It took a few days of recovery, but then I thought: “Why not?” Of course, the couch potato in me could think of a million reasons, but the adventurer in me could not mention one. That part of me smelled unresistable adventure.

Being both dummies in winterhiking, we thought it would be wise (and fun!) to join the winter weekend of our hiking group. Our destination is at the roof of Belgium: the High Fens, a plateau region that belongs to both the Belgium Ardennes and the German Eifel. A typical landscape, characterized by its wet spongy ground covered with a diversity of mosses. It’s also the wettest and coldest area of Belgium.  So, perfect for cross-country skiers and for us, aspiring winterhikers. 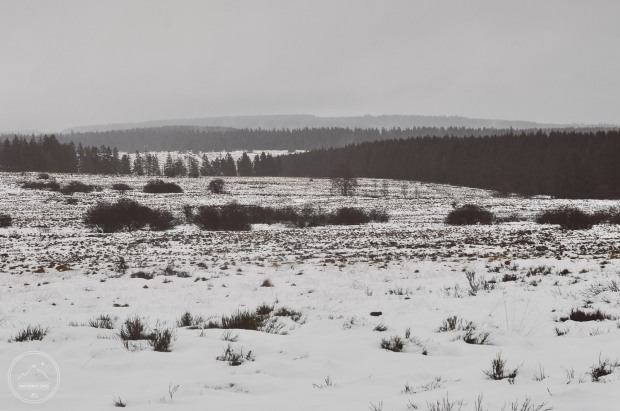 The High Fens in winter, by David Capelle

The big question is, obiviously: how did I survive my first winter hike? Well, for starters, the group was led by Steve Behaeghel, who has tremendous experience in hiking all over the world. No less important was the group itself: the usual ‘subgroups’ did not emerge but we became one big, fun group, even though we had diverse backgrounds, ages, and even nationalaties. Oh yes, Dutch and Belgian are not the same. Apparantely – so I learnt from our new Belgium friends – Dutch people have the reputation to be loud. Interestlingly though, was that not we, but a Belgian fellow, felt the need to wake everyone up screamingly… 😉

Not to forget, the winterhiking itself, which was, actually, not that different from summerhiking. The landscape, of course, was now covered in snow, but that’s not a reason to avoid hiking or camping. The joy of simply being in nature and travelling by foot remains the same, independent of the season. Soon I found out that my boots weren’t waterproof anymore and that gaiters would have been a good idea, but I couldn’t care less about the mud. It was actually kind of fun. Besides, in terms of mud, we were all beter off than poor Nick (see also the video below): 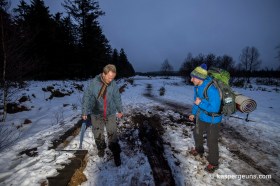 That evening, I felt tired, but also very rewarded after a day of hiking, laughing, and sharing stories. We tried to make a camfire – again, most credits to Nick, who totally went for it by lying in the snow, blowing at the base of the fire – but unfortunately, the weather had been too humid. 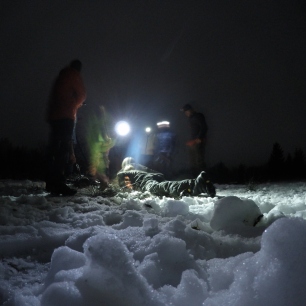 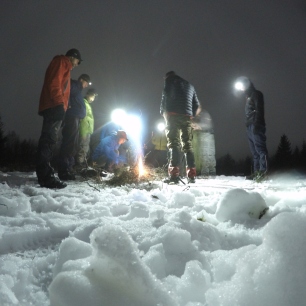 And how was sleeping in the snow, you may wonder. We slept with the tent open (to prevent condensation), so I fell asleep and woke up seeing the snow. It was fantastic. Unlike usual, I didn’t feel the cold, while Aaron did. It had probably something to do with me being dressed like sleeping on the north pole. Some guys only slept in their baselayer, but I crawled into bed, happily wearing my baselayer, fleece, and ‘borrowed’ down jacket.* It felt much better than being a coach potato.

*I’m a happy owner of a Cumulus down sleeping bag, and I recently found a Dutch online company that sells Cumulus down jackets. The great thing is, that you can first test their materials (for free) before buying it. Awesome! 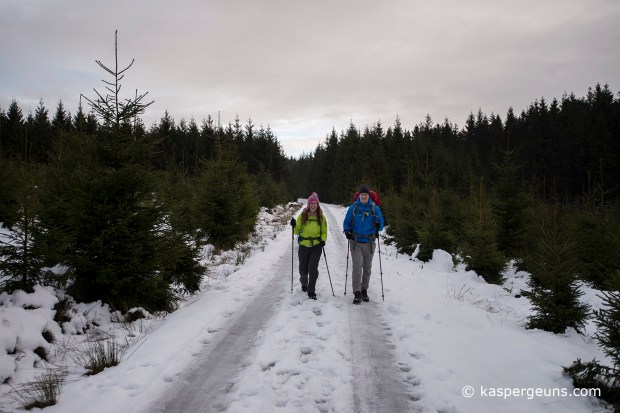 Together with Aaron, happy that he persuaded me to winterhike. A photo by Kasper Geuns

At the end of this trip, I had not only learnt how great winterhiking is, but also that beer is powerful fuel for hiking. Redbull doesn’t give you wings, Belgium beer does!

11 thoughts on “My first winterhike: Good beer, crazy Belgians, and a boyfriend to keep me warm in the snow”